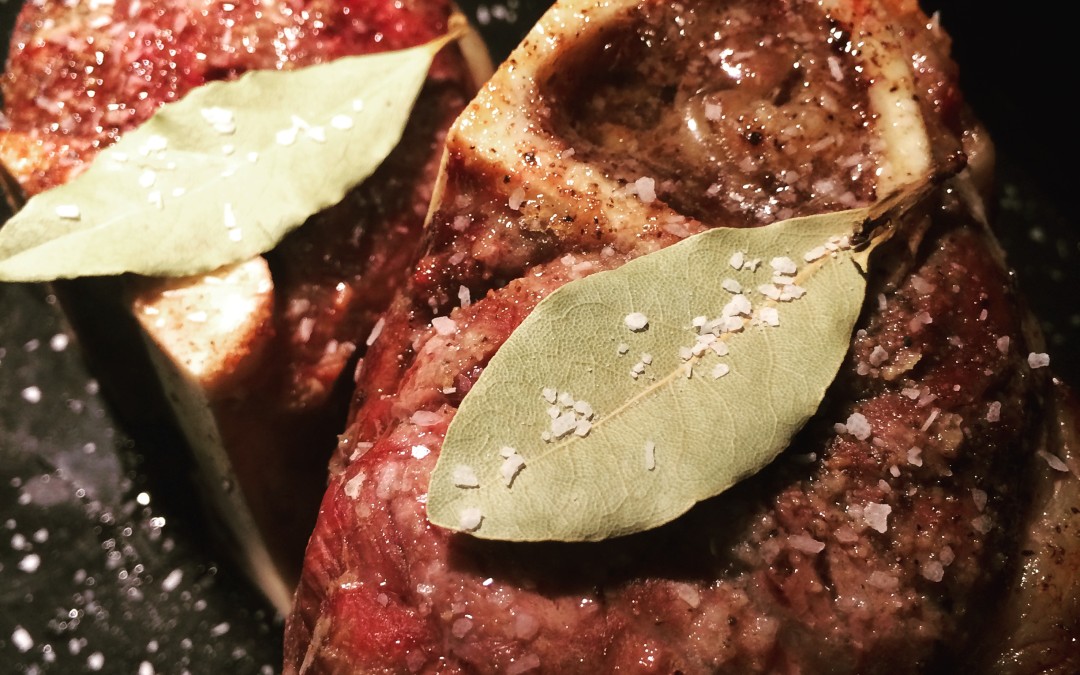 Ah yes, the bone broth trend. Well, I hate to break it to ya, but it’s less of a “trend” and more just…. well, how it should be done. I’m not busting on you if you use canned broth, but if you want a better tasting, better for you, more flavorful broth, then bones are the way to go. And it’s WAY easier than you think. Promise.

I’m not about to tell you that I was doing this before it became a trend. Because actually, my mom was, and she’s the one who taught me. We’d throw bones, veggies, and seasoning in a big stock pot and let it simmer on the stove most of the day. At the end we’d wind up with a lovely, golden-colored bone broth. Then I had a kid and “most of the day” was gone before I knew it.

But you know what else is making a comeback? Slow cookers. Normally I’m about doing things the old-fashioned way, but when I added this handy dandy convenience to the mix, it actually made it…GASP…better! With just a quick oven roast on the bones before hitting the slow cooker, this is probably the easiest bone broth I’ve ever done.

Before you get started, preheat your oven to 425°, then start pulling your ingredients together.

1.) Use as much of the salt and pepper as you need to sprinkle over any meat you have left on the bones.
(If you’re using leftover bones from meat that was already seasoned and cooked, you probably want to go easy. You can always add more salt later.)

2.) Spray a glass baking dish or other roasting pan so your meat doesn’t stick, then put it in the 425° oven for about 20 -25 minutes. (It will depend on the size/type of your bones, but you’ll start to smell them when they’re getting done.)

3.) When your bones are done roasting, transfer them over to the slow cooker. Add the rest of your salt and pepper, then toss in the onion, garlic and bay leaves. Cover with enough water to almost reach the lid of your slow cooker (Trust me, it will dissolve when cooking.) and turn on High.

4.) Here’s part that’s your choice: cook time. If you’re someone who needs directions (and I totally get that), this might make you nervous, but it’s really up to you. I cook my beef bone broth on high in the slow cooker for 48 hours. Yes, really — because A.) I have a baby, so I’m a master procrastinator, and B.) the difference in color and flavor is amazing. Leaving it in the slow cooker for that length of time gives you an ultra-concentrated version of beef bone broth, so you need less of it when you use it for something like beef and barley soup.

5.) Once you’re ready to take it out, toss your bones (or I guess now you could give them to the dog) and let the broth cool before you put it in your container of choice (especially if you’re using plastic and have any concerns about that nasty BPA stuff). Toss it in the fridge, and once it’s completely cool, scrape off any fat that collects on the top layer. It will keep up to about a week in the fridge, but I like to freeze mine.

So, there you have it – beef bone broth in a slow cooker. Who knew? Well, you do now. If you’ve always been a stovetop broth cooker, or even if you’ve never made it before, I’d love to hear how it turns out for you. Post in the comments below or find me on Facebook or Twitter!